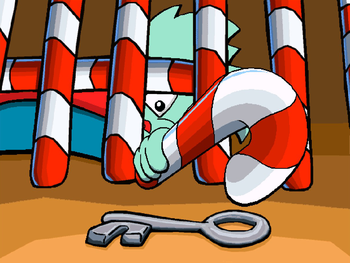 When a character is locked up, traditionally his captors will place the keys to the cell hanging on a peg on the wall directly opposite the cell, and then leave. The keys will be just out of reach of the character who will have to fashion some way of reaching the keys (rod, wire, etc.) from the resources available in the cell. Alternatively, the character can lob things at the keys, hoping to knock them off the wall so they land in a reachable position.

Alternatively, the jailer may not leave, but instead hang the ring of keys on their belt and then obligingly stand with their back to the cell. In this case, the prisoner will have to surreptitiously lift the keys off the belt without being noticed.

Sister Trope to Pet Gets the Keys, Conveniently Placed Sharp Thing, and Within Arm's Reach (when this occurs in a Fight Scene and not in captivity).