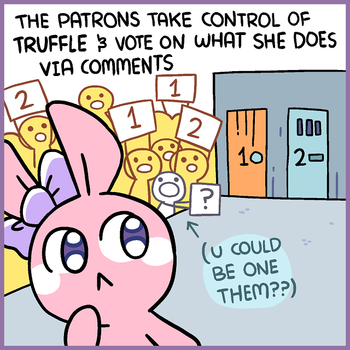 A Webcomic that, unlike most webcomics that have a set story and swipe reader speculation periodically, takes a lot of reader input. Frequently, the author will take so much reader input that nearly the entire webcomic is made of user suggestions. As such, they always have some way to put in suggestions, whether it's a designated forum where you can post in a suggestion box, comment in a comment box, a Shout Box, or an email address you can send suggestions to. In fact, many of these comics had their origins in forum threads, where the update panels are in-line with the discussion of said panels and the suggestions.

In many cases (nearly all since the Trope Codifier MS Paint Adventures), the webcomic will be presented as if it were a log of an Interactive Fiction game (with pictures). Because commands are parsed by a human and only one (or a very select few) command paths are actually used, the story usually ends up far more complex than is possible to program into a game (mostly because the Combinatorial Explosion is much smaller and can thus be handled manually). Due to the sort of people who make these comics, these comics also frequently spoof such things as Adventure Games, Simulation Games, Puzzle Games, Roleplaying Games, or Turn-Based Strategy games.

These comics generally update with only one panel at a time and as such can be updated very quickly. Often even more than once a day.

For obvious reasons, these comics cannot use a Strip Buffer at all.

Frequently these comics straddle the boundary between Webcomic and New Media/Web Original. General precedent seems to be to put Interactive Comics in the Webcomic category. More and more however, traditional web comic creators are experimenting with the medium.

Several websites include entire sections in which Interactive Comics can be created.

Tropes common to Interactive Comics include:

forum (now a redirect to the hereinafter mentioned archive websitenote On March 29th, 2016 the forums crashed, possibly after an attack, and could never be satisfactorily be brought back up; many adventures were continued on other forums such as Eagle Time and Omega Update.), which as the name suggests is part of MS Paint Adventures' forum. A substantial number of these are fanfiction of Homestuck, and a lot of them are archived on MS Paint Fan Adventures

, a collaborative mirror site which transposes these adventures from forum posts into the style of MSPA proper.
Questden
Questden was created to run image board quests, which use a mix of pictures and accompanying text to tell stories..
Bay 12
Bay 12 has several in the Forum Games and Roleplaying section, including such works as thiiiiiiiis