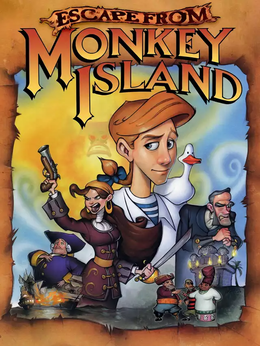 "Spitting the sand of Monkey Island from my mouth, I began to wonder if the life of a mighty pirate was all it was cracked up to be. If only I'd chosen a different path, LeChuck might still be dead, and the mystery of the Ultimate Insult might have remained an enigma. If I'd never picked up a sword, the grog-swilling pirates of the Tri-Island Area might be unthreatened by the twin forces of gentrification and demonic heckfire. If only..."
— Excerpted from The Memoirs of Guybrush Threepwood: The Monkey Island Years
Advertisement:

Escape From Monkey Island is the fourth game in the Monkey Island series, released in 2000 by LucasArts. It was also the first 3D game of the series (which used a modified version of the engine from Grim Fandango). Guybrush and Elaine return from their honeymoon to find two problems: Elaine has been gone so long she's been declared legally dead, and is thus no longer governor of the Tri-Island area, forcing her to run for re-election against the challenger "Charles L. Charles". Furthermore, a sinister Australian businessman named Ozzie Mandrill has been buying up property all around the Caribbean, driving out the indigenous pirate-themed businesses (and the pirates along with them) in favor of coffee houses, theme restaurants, and other tourist traps. Guybrush soon discovers Mandrill is not only in league with a yet-again-resurrected LeChuck, but the two are after a sinister artifact known as the "Ultimate Insult" that will allow them to rule the Caribbean.

After being hard to find for a long time, the game was finally made available digitally on GOG.com and Steam in 2018.