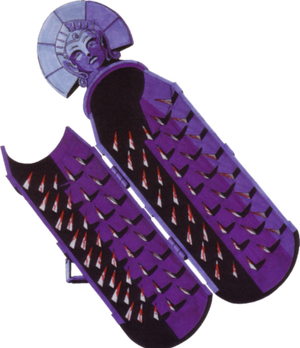 HALLOWED BE THY NAME!
"Within this virgin of cold ore, who shall swallow even your screams with her embrace, suffer in anguish as your entire body is stabbed and skewered! IRON MAIDEN!!"
— Naofumi Iwatani, The Rising of the Shield Hero
Advertisement:

is a form of medieval torture wherein a person is stuffed into a man-shaped metal case with Spikes of Doom all around the insides, causing the poor soul to get stabbed and eventually die. Often, that metal case is also a coffin. This effectively combines the two Primal Fears of impalement and claustrophobia.

If Played for Laughs, the victim might emerge, drink something and have the liquid spill out of Invisible Holes. Obviously, this is more common in cartoons.

Despite taking hold in popular culture, this is a Dead Unicorn Trope. There is no evidence of tortures via iron maidens in the actual medieval era, and they probably never existed at all in real life. The modern image of the iron maiden may come from erroneous interpretation of the actual purpose of a real torture device known as "Schandmantel

Can often be found in a Torture Cellar. See also Punishment Box, which is a slightly more humane version.

Not to be confused with the heavy metal group, though they are named after the device. Also no relation to Iron Ladynote Although the Trope Namer was supposedly a failed attempt by the Russians to reference this trope, or a young woman who is Made of Iron.