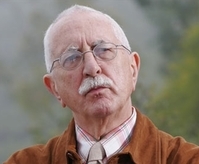 Leonard Cyril Deighton (born 18 February 1929) is considered one of the Three Great British Spy Writers, along with Ian Fleming and John le Carré. His work lies roughly between the two on the Spy Fiction scale, though closer to the "stale beer" end - grounded in the complications of politics, intrigue and loyalty like le Carré, but with a touch of Fleming-esque zip to the pacing, some exotic globetrotting, and (in the Unnamed Spy) a snarky main character who's good with women and can get by in a fight.

His most famous series, beginning with The Ipcress File, features an unnamed spy (who was named Harry Palmer when three of the novels were adapted into films starring Michael Caine).

His seminal work is considered to be Bomber, a meticulously researched and detailed account of a fictional British air raid during World War II and the devastation it causes.

Another well known series of his is the Bernard Samson Series, best described as a Trilogy of Trilogies with an epic thrown in for good measure. It's set around Berlin near the end of the Cold War. Famously, this series popularized the story of JFK accidentally saying he was a jelly doughnut, although since the protagonist is an Unreliable Narrator, it should be taken with more than a grain of salt.

In his SS-GB Alternate History book, Hitler has invaded England and defeated the British. The book also features Mayhew, one of the most subtle and formidable Chessmasters in literature of any kind.

Deighton's also written some non-fiction works, most notably Fighter and Blitzkrieg, the first two instalments in an Orphaned Series on WWII battles.

Still alive, but has not written a full novel since 1996.

Works by Len Deighton with their own trope pages include:

Other works by Len Deighton provide examples of: