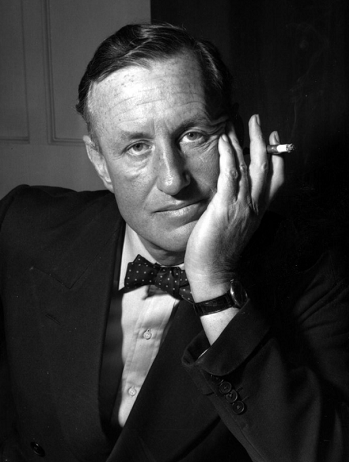 Ian Lancaster Fleming (28 May 1908 – 12 August 1964) was a British author who radically altered Spy Fiction when he started writing.

During World War II, he served in an intelligence planning role with the Royal Navy, planning some very successful and some very odd covert operations (one, involving getting Rudolf Hess to come to Britain via an occultist, was cancelled when Hess flew to Britain on an unauthorized peace mission anyway via his manic hallucinations in 1941note Even stranger, Ian's brother, Peter Fleming, wrote a novel, The Flying Visit, a year earlier where he imagined Adolf Hitler doing that exact stunt!). Fleming also planned an operation called Operation Goldeneye aiming at securing Gibraltar. "Goldeneye" would become the later name of his house in Jamaica note and a movie in the franchise he created (the name was lifted from the book Reflections in a Golden Eye, which he loved and which was later made in a film with Marlon Brando and Elizabeth Taylor).

It used to be believed that Fleming never went on active service undercover, and some attributed his Bond stories to being the product of frustrated fantasy, Bond living the secret agent's life that Fleming had stolen from him. (Fleming was not unfit for field work; the fact was he was too highly-placed and knew too many secrets to risk capture, since he was employed as an intelligence analyst and controller/coordinator of field agents.). However it is now known that he did in fact actually go on at least one mission

to occupied France in 1940, and actively served alongside Jon Pertwee. It is also believed that he masterminded an unsuccessful "pinch mission" in 1942 for a German Engima coding machine and related material using the infamous Dieppe Raid as cover. He also stayed in Portugal for a while during the War, since it was a neutral nation and there were great needs for information from both the Allies and the Axis' spies.

Rather a notorious womaniser in his youth, he eventually settled down and married (although he would reportedly have the ocassional affair). In 1952, just before this, he wrote a novel that would change the world of fiction.

That novel was Casino Royale. With it, James Bond's literary career began and Fleming made a lot of money. He sold the rights to everything bar Royale (the rights for which were already tied up) to Albert R. Broccoli in 1961 and the rest is history.

Fleming wrote 12 Bond novels and 9 short stories, one of the latter being the source of the title for Quantum of Solace. He also wrote Chitty Chitty Bang Bang and two non-fiction works - The Diamond Smugglers (about Exactly What It Says on the Tin) and a travel guide called Thrilling Cities (which included one of the Bond short stories). The level of research is clear in his Bond novels. People mainly familiar with the films (which are defined by The '60s) may be surprised at the level of The '50s present in the books, the decade in which most of them were written, which covers things like technology level, social attitudes and a more straightforwardly hostile view of the Soviet Union - the films retconned most stories with Soviet villains, forming the Ur-Example of the Renegade Russian trope or having them manipulated by Blofeld's apolitical SPECTRE.

He died in 1964 of a heart attack, the result of a 70-cigarette a day smoking habit and a love of liquor bordering on the full-blown alcoholic (he was known to down twelve vodka martini in an evening, each stronger that the one before). He died before fully completing the novel The Man with the Golden Gun, depending on whom you ask.note  Some people say he did complete it, but never got to revise it. Others say that he didn't and Kingsley Amis finished it for him. Amis, for his part, denied finishing Golden Gun.

He also missed the release of Goldfinger, the movie which fully launched the James Bond craze worldwide; Dr. No had only met a lukewarm response, while the following From Russia with Love was just successful enough to spawn a sequel.

Who precisely inspired Bond is a matter of debate. Fleming almost certainly included idealized aspects of himself. Somewhat of a self-loathing insecure fellow, he also included several 'bad' aspects of himself in his memorable over-the-top Bond Villains, especially (it's inferred) the perceived sadism toward Bond Girls (which, aptly, are tyrannized by the 'bad' Fleming -the villain- and cruelly humiliated/abused, before being rescued by the 'good' Fleming, i.e. James Bond). However, his wartime experience and contacts certainly provided a lot of ripe material for his stories — several sources suggest his cousin and SOE mate Sir Christopher Lee as another possible prototype while others suggest Churchill's Spymaster William Stephenson, codename: Intrepid, as another.