Literature / The Man with the Golden Gun 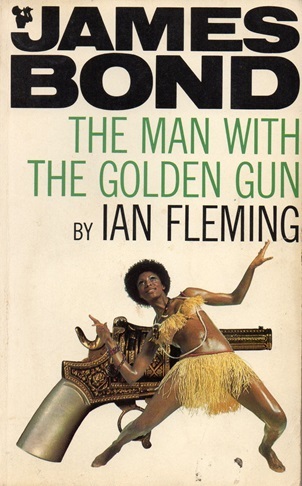 The thirteenth James Bond book by Ian Fleming, published in 1965 after his death; Fleming only got it to draft stage. Kingsley Amis was rumoured at the time to have tidied it up - in fact, Fleming's publisher had him look over it for feedback, but ultimately chose not to take any of his suggestions. For that reason it's the most bare-bones Bond novel, with far less of the kind of detail Fleming would usually insert in his second draft, and there are a number of minor continuity errors.

A year after his disappearance in the ending of the last book, Bond returns to England and makes contact with MI-6. Unfortunately, he has been brainwashed to be an assassin for the Soviet Union, and he tries to kill M. This fails, and after his recovery, Bond must prove his worth to the Secret Service by being tasked to take down one Francisco Scaramanga, a Professional Killer who is responsible for the deaths of many of Bond's fellow agents.

The story became the basis for the ninth James Bond film.