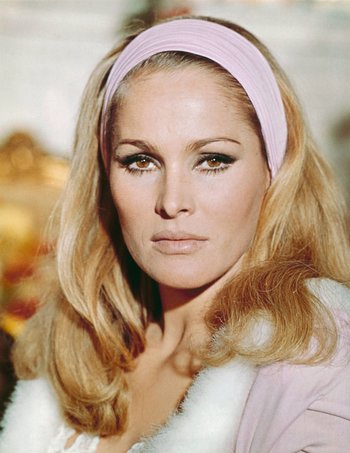 Ursula Andress (born March 19, 1936 in Ostermundingen, Switzerland) is a Swiss actress and model.

She's best known for her role as Honey Ryder in Dr. No (Ian Fleming apparently liked her performance so much that she is mentioned by name in his novel On Her Majesty's Secret Service, as a famous actress who is a guest in Blofeld's ski resort). She studied art in school. Fluent in French, German, and Italian, she appeared in a few Italian films in the 1950's before moving to Hollywood. She learned English by watching old Marlene Dietrich films, but had trouble getting roles because of her heavy Swiss-German accent.

She dated James Dean shortly before his death. She was married to John Derek (Bo Derek's future husband) from 1957 to 1966. Though she never remarried, she had many romantic partners over the years, including the 15 years younger Harry Hamlin, who gave Andress her only child, Dimitri.

Though she retired from acting in 2005, she appears in talk shows, charity events, and art auctions from time to time. Even in her old age, she maintains an active lifestyle, as she believes in living life to the fullest by hiking, riding motorcycles, etc. Unfortunately, in 2008, she was diagnosed with osteoporosis and was urged to slow down because her bones are becoming brittle.