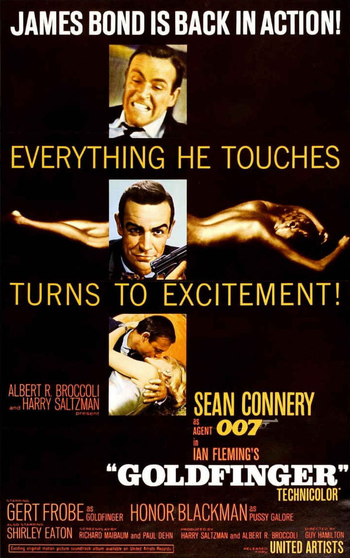 This heart is COOOOOOOOOLD!!
Bond: Do you expect me to talk?
Goldfinger: No, Mr. Bond, I expect you to die!
Advertisement:

The one pop culture parodies the most.

Goldfinger, directed by Guy Hamilton and starring Sean Connery, is the third film in the James Bond franchise by Eon Productions, released on September 18, 1964. It was the first film in the series to feature a song as Title Theme Tune, by Shirley Bassey, launching a trend for the majority of the following films.

James Bond has to investigate around the shady businesses of tycoon Auric Goldfinger (Gert Fröbe), who has an obsession for gold and a network that stretches from Switzerland to the USA. Bond soon uncovers a sinister plot with the US Bullion Depository at Fort Knox as target...

Has several famous scenes that have been subjected to countless parodies, including: Goldfinger threatening to cut Bond in half with a laser... slowly — upward, "No, Mr. Bond, I expect you to die", Bond's high-stakes golf game, and the death of Goldfinger's traitorous employee Jill Masterson, her naked body sprawled across her bed and painted gold.

This movie also gave the franchise its first Cool Car. In fact, one of the great virtues of the film is that the gadgets shown, such as the car and the personal tracer, are over 50 years old and they still look both believable and neat (and in the case of the GPS-esque tracer, are modern-day consumer goods).

Preceded by From Russia with Love and followed by Thunderball.

Do you expect me to talk?

James Bond: [to Pussy] Oh no, you don't! This is no time to be rescued.