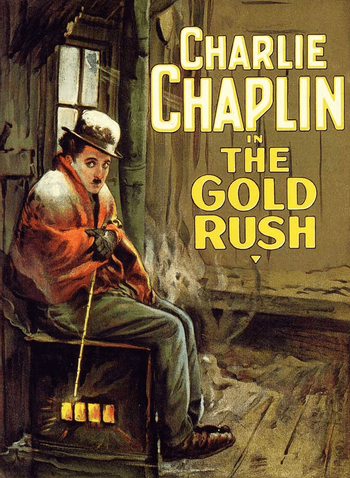 The Gold Rush is a 1925 film directed by, written by, and starring Charlie Chaplin.

Chaplin plays "The Lone Prospector" — that is, the Tramp in Alaska during the Alaska Gold Rush. Charlie, blundering around the snowy mountains, winds up stuck in a cabin with considerably more competent prospector Big Jim McKay (Mack Swain). Big Jim and Charlie are reduced to eating Charlie's shoe, and Big Jim nearly eats Charlie before Charlie finally shoots a bear. After eating they part ways amicably. Big Jim stumbles across a very rich gold strike ("a mountain of gold!") as well as fugitive murderer Black Larsen (Tom Murray), who hits Jim in the head, causing him to have amnesia.

Charlie makes his way into the nearest gold rush boom town, gets a job cabin-sitting for another prospector, and falls in love with haughty dance-hall girl Georgia (Georgia Hale). Georgia loves another, ladies' man Jack Cameron, and teases Charlie. Eventually Big Jim, who remembers that he found a mountain of gold but can't remember where it is, runs into Charlie in the town and gets Charlie to lead him back to where the claim was. Will the Lone Prospector find riches and true love?

Is often cited as Charlie Chaplin's masterpiece, and reportedly Chaplin's favorite of his own films. He re-released in 1942, in a version crafted for sound that replaced all the title cards with Chaplin's own narration. The newer version also revised a plot point (Georgia's letter) and cut The Big Damn Kiss from the end of the movie.

The 1925 original can be seen here