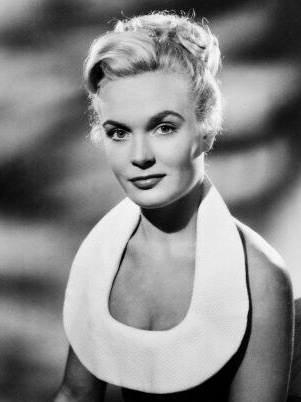 Her career spanned the 1950s and '60s in many British movies, mostly as a Ms. Fanservice. However, she is most recognized for her roles as Jill Masterson (whose corpse ends up gold-painted) in Goldfinger, as The Pete Best in the early Carry On films, and as one of the would-be victims in the 1965 film Ten Little Indians (an adaptation of And Then There Were None). She also acted in stage productions and did television work, notably playing several roles in The Saint, but retired in 1969 due to being homesick for her family.

Since then, Eaton hasn't made many public appearances. However, she released an autobiography in 1999 called Golden Girl, as well as additional books featuring her artwork and on-the-set photographs when she was acting. She also appeared as herself in a 2003 episode of MythBusters that investigated if Jill Masterson's method of death was actually possible.