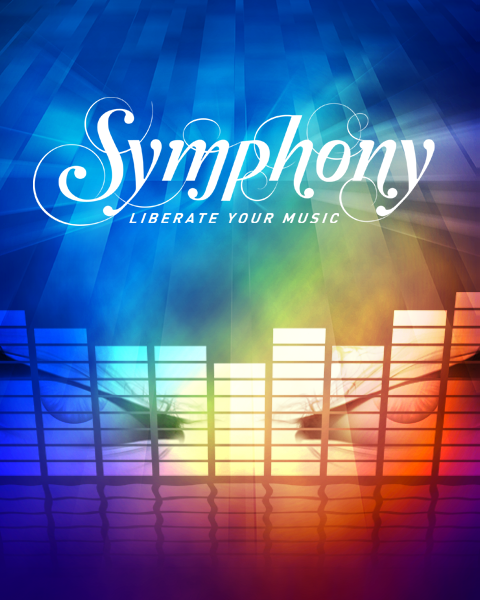 Your music is under attack. You must liberate it.

In the veins of Audiosurf and Beat Hazard, Symphony is an indie game that generates its levels by analyzing your own music. However, unlike Audiosurf, Symphony is a scrolling shooter and has a plot. Created by Empty Clip Studios in 2012, the game runs on the RapidFire Engine, the very same engine used by the developer's previous big game, Groovin' Blocks for WiiWare (and later Wii with a retail release). The graphics are abstract, smooth, and have a translucent feel, emphasizing pure shape and color over texture, and the interface is very basic and simple, both qualities of Groovin' Blocks.

The plot goes that an unknown entity suddenly decides to assault your precious music collection (and the included soundtrack), and you must defeat it by freeing the souls of five great composers, stopping something called the Symphony of Souls from allowing this entity to cause havoc. It isn't an especially deep plot, but it's still notable due to the lack of plots in games like this. That, and the entity is pretty interesting; he appears by taking up the whole screen, glaring at you with his Glowing Eyes of Doom, and speaking in a voice that randomly modulates between a normal, tenor-voiced man to a deep, distorted, growly tone. And then proceeds to talk directly to you, the player, often taunting and threatening you.

The gameplay is tight, but how intense it is depends on literally how intense the track is. The more intense the music gets, the quicker and trickier the enemies move. This is also relative to the track; if you put in a quiet one, the most-intense parts of that track will register as the higher intensity mode in the game. The scoring is also different from other shooters. Whereas most shooters give you points for destroying enemies, the enemies drop the points on the field when defeated. Meaning you have to go over and pick them up before they fade away, or you won't score the points. Which is hard when there are tons of enemies on the field almost constantly. Add to this the fact that you lose a considerable amount of points when you die (you otherwise have infinite lives), and you've got a true challenge on higher difficulties.

Your ship has four slots for a range of weapons, each of which can be pivoted to aim a different direction. Each time you beat a different track, you can unlock a new weapon (these will be repeated after a point). You can then upgrade these weapons (all but your starting blasters) by spending both normal points (Inspiration) and points earned by reaching point targets. However, you can also get "Furia weapons", stronger versions of the normal kind, that do more damage, but consequently cost more to upgrade. Another thing to note about weapons is that the stronger your ship, the lower the score multiplier at the end for the leaderboards. Seeing as enemies' defenses increase with difficulty, though, good luck trying to get a multiplier above a fraction. Your real Inspiration and Kudos are unaffected, though, and you earn more Kudos on higher difficulties.

Until you beat the game, occasionally, a boss might barge into a track, staying in that track if you decide to quit or lose against it. You fight a boss three times, in three separate tracks, until you clear a page of the Symphony of Souls. The boss gets harder each time, naturally, and the next boss you fight after one set has different tactics. Oh, and you're timed, but this IS a music game, so it makes sense. And you don't get to submit your score to the leaderboards on that song the first time through either; this is probably because the boss drops a TON of Inspiration after you defeat it.

Tropes surfed over by this game include: