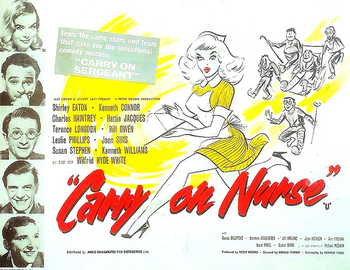 Jack: W-w-what happens if anything goes wrong? Heh-heh.
Oliver: We-we'll have to amputate your leg.
— An unqualified and high on Laughing Gas Oliver Reckitt before performing bunion-removal surgery on Jack Bell.
Advertisement:

The movie is based around many subplots with lots of different characters that meet up in a location - in this case, being in a hospital. This would soon be the typical set-up that many of the successful Carry On films would follow years later.

Journalist Ted York (Longdon) is rushed to Haven Hospital with appendicitis. Once he arrives, he meets Staff Nurse Dorothy Denton (Eaton) and falls for her. The other nurses at Haven Hospital include clumsy Student Nurse Stella Dawson (Sims) and Nurse Georgie Axwell (Stephen). One thing they all have in common is their annoyance with the Colonel (Hyde-White), a private patient who won't go five minutes without bothering them or getting Mick the orderly (Harry Locke) to place horse bets for him.

Meanwhile the men's wing is looked over by the frosty Sister (Joan Hickson) and the fearsome Matron (Jacques), and is populated by several interesting people - new arrival Bernie Bishop (Connor), a boxer with a broken hand; Humphrey Hinton (Hawtrey), who is never without his headphones; Perc Hickson (Owen), who's leg is in plaster; Bert Able (Cyril Chamberlain), who misses his wife, Alice (Marianne Stone); Henry Bray (Brian Oulton), who tries to appear upper-class; and Oliver Reckitt (Williams), an intellectual who clashes with Matron at every opportunity.

Visiting hours bring the men's friends and family over, and bring about some new developments - Ted's editor Alec Lawrence (Ed Devereaux) gets him to write some articles on hospital life; Oliver is met by Jill Thompson (Jill Ireland), the sister of his friend Harry, and the two struggle to express their feelings for each other; Bernie's manager Ginger (Michael Medwin) tries to give him advice for in the ring; and Henry's wife Rhoda (Hilda Fenemore) ruins any allusion of class he had going for him.

After this, another new face joins the men's wing - playboy Jack Bell (Phillips), who has to have a bunion removed. When Jack's operation is delayed and puts his chances at a romantic weekend with his girlfriend, Meg (June Whitfield), in jeopardy, Hilarity Ensues as the men in the ward decide to get drunk and try to tackle the operation themselves, while Nurses Dawson and Axwell manage to finally get back at the Colonel, with the help of a daffodil, of all things.

For other Carry On films about doctoring, see Carry On Doctor, Carry On Again Doctor and Carry On Matron.