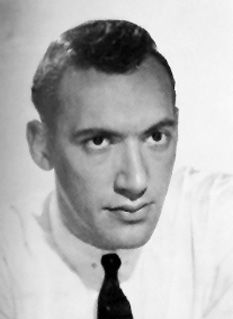 "I only arsked!"
"Be nice to people on your way up the ladder, for you may meet them again on your way down."
Terry-Thomas, to Bresslaw
Advertisement:

Bernard Bresslaw (25 February 1934 — 11 June 1993) was an English comic actor and singer, mostly known for his appearances in the popular Carry On film series.

He first became interested in acting after he visited the Hackney Empire in London and was also encouraged to study a course in it by his primary school teacher. He was given a scholarship to the Royal Academy of Dramatic Art by the London Country Council and a Emile Littler Award for being the most talented and promising newcomer. After graduating, he began to appear on radio shows and a popular sitcom called The Army Game, as well as other comedic television work, and often toured army camps and prisons in order to find experience in order to play hardened criminals in theatre shows. When The Army Game became even bigger than it already had been, Bresslaw appeared in its theatrical release, releasing a single for the movie's theme song, which remained high in the charts for weeks.

For most of the 1950s, Bresslaw mostly appeared in London's West End or the Royal Albert Hall in stage productions and many pantomimes. This was where he met his wife, who was a dancer in a Sleeping Beauty performance, and they had three sons.

In 1965, he appeared in Carry On Cowboy, and became a recurring actor in the Carry On film series for at least 10 years. His 6'7 height made him the tallest cast member of many productions he appeared in throughout his career, but it was often put to good use specifically in the Carry Ons as either Dumb Muscle or Large and in Charge characters. Outside of the series, Bresslaw mostly made background or recurring appearances in television series such as The Goodies, Sykes, and the Doctor Who serial "The Ice Warriors".

When he left the Carry On series in 1975, he returned to the theatre, mostly appearing in Shakespeare productions and television commercials for BT. Bresslaw was determined to show the public that he was able to portray characters that were outside of completely comedic; the Carry On film series had cemented him in the comic type casting and some of his television roles that he had chosen in the meantime hadn't helped either.

One of his last performances were in Twelfth Night and the genie in Aladdin, and was preparing to appear as Grumio in The Taming of the Shrew to show critics that he could portray more serious characters, but he died from a heart attack in his dressing room on the night of the performance minutes before he was due to take the stage. It was ironically before his arguably best acting role of his career.