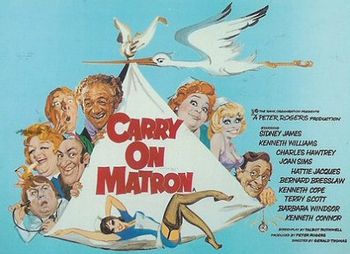 Freddy: What are we looking for?
Sid: Oh, knickers!
Freddy: Here Sid, I found 'em.
— Freddy telling Sid Carter that he's found a pair of Matron's over-sized knickers during their heist.
Advertisement:

Carry On Matron is the 23rd film in the Carry On series and was released in 1972. It stars Sid James, Kenneth Williams, Charles Hawtrey, Joan Sims, Hattie Jacques, Bernard Bresslaw, Kenneth Cope, Terry Scott (in his last film in the series), Barbara Windsor, and Kenneth Connor.

Sid's plans to rob the hospital aren't foolproof however, as the no-nonsense Matron (Jacques) begins to gain suspicions over recent developments at the hospital. Sir Bernard then begins to gain feelings for Matron, but making progress at courting her is made difficult by him believing he is turning into a woman before accusing the clueless Dr. Francis A. Goode (Hawtrey) of having an affair with her.

Matron and Sister (Jacki Piper) try to keep the patients happy despite all the shenanigans amongst the staff, but have trouble with expecting couple Mr. and Mrs. Tidey (Connor and Sims), who have been waiting for three weeks for the baby to be born. Mrs. Tidey is treating her stay as a holiday and won't stop binge-eating, while her railway worker husband is left forever racing between his trains and the waiting room.

The final issue with Sid's plans is that Cyril seems unable to keep a low profile, and after becoming a sensation for single-handedly delivering the triplets of film star Jane Darling (Valerie Leon), Sid and his gang have to strike while the iron is hot and don disguises of their own to pull off their heist before it is too late as Hilarity Ensues.

For the other Carry On films that are hospital-based, see Carry On Nurse, Carry On Doctor and Carry On Again Doctor.