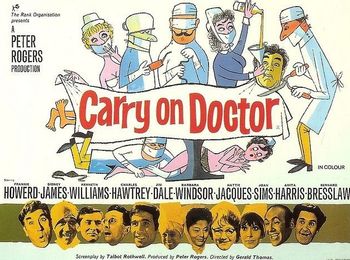 "A Bedpan-aramma of Fun!"
"I don't need doctors, I don't need medicine... and nor will you, if you just think: "Nothing... nothing will happen to me," and believe me... nothing will!"
Francis Bigger, Tempting Fate.
Advertisement:

Carry On Doctor is the fifteenth film in the Carry On film series.

This was the second Carry On to be about the medical profession or set in a hospital; the first being Carry On Nurse back in 1959. It focuses on the antics of the patients and the medical staff in a hospital, who have lots of personal problems either in their private lives or with each other.

Firstly, faith leader Francis Bigger (Howerd), who tours around the UK promoting positive thinking about health, is admitted to hospital after falling off the stage at one of his lectures - a thing that he loathes because he doesn't believe in medical care - but he is rather grateful that he is away from his deaf assistant Chloe Gibson (Sims).

Secondly, there are the patients in the ward: Charlie Roper (James) is a lazy workshy man who constantly finds ways to make himself seem worse off than he is; Mr. Barron (Hawtrey) is thought to be suffering from prenatal depression due to his wife Mildred (Gwendolyn Watts) waiting patiently for her labor to commence, so is sent to have pregnancy classes with expecting mothers; Ken Biddle (Bresslaw) is suffering from a broken leg after falling off the surgery table during his appendix operation, who also has feelings for Mavis Winkle (Laye) in the female ward; and Mr. Smith (Butterworth) who has had a lump removed.

To see the critically acclaimed medical Carry On "sequel", see Carry On Again, Doctor. Also see Carry On Nurse and Carry On Matron for other hospital-based movies.