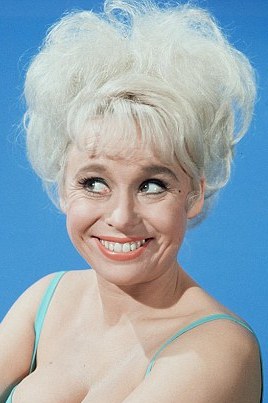 GET OUT MY PUB!!
Peggy Mitchell
Advertisement:

Born in London, she began her career in theatre at thirteen years old, before her movie debut in the 1954 movie The Belles of St. Trinian's. She mostly appeared in small roles throughout the beginning of her film career (one of them netted her a BAFTA Best Actress nomination), but she was soon became a household name after her appearance in Carry On Spying in 1964, which led to her appearing in the film series ten more times, and then being associated with the series as the Ms. Fanservice that attracted several dim-witted older men. Windsor's character in Carry On Camping was responsible for one of the most famous scenes in the series' history (and possibly of all British cinema) in which her bikini top snapped off during an exercise lesson and there was a brief flash of her bare breasts. It has led many to believe that this scene was the reason why it was the most successful summer blockbuster of 1969 and the possible catalyst to the British sexual liberation in media.

In between films, she appeared on Broadway and the West End throughout the 1960s, '70s and 1980s, managing to net a Tony Award nomination. In 1994, she debuted in EastEnders as Peggy Mitchell, taking over from her original actress Jo Warne. Mitchell soon became one of the most well-known and popular soap opera characters in British media due to this, as well as her iconic catchphrase "Get out of my pub!" back when she owned The Vic. Windsor portrayed the character until leaving in 2010, only to return in May 2016 when Peggy Mitchell wanted to say goodbye to her family before committing suicide; when Windsor wasn't in the soap, she made appearances in television commercials and on the radio.

Windsor's personal life at the beginning of her career was controversial and very newsworthy. She was once engaged to one of the Kray twins — the most famous and dangerous Jewish gangsters in British history, and then shot into the news years after over an affair with Carry On costar Sid James. Despite this, she was married three times with her last marriage beginning in 2000 and continuing into the present day.

After fifty years Windsor continued to act, but also did a lot of charity work, being a patron to the Amy Winehouse Foundation, as well as several promotions during the London 2012 Olympic Games. In 2000, she was awarded an MBE, followed by a dame-hood in 2016 for her services to acting and charity, as well as an honorary doctorate in 2014 by the University of East London. In 2018 it was revealed she'd been diagnosed with Alzheimer's disease in 2014 and in 2019 her husband and several of her Eastenders co-stars ran the London marathon in aid of a dementia campaign. Windsor and her husband became ambassadors for the Alzheimer's Society charity in the same year. She died in 2020 following a battle with the disease.