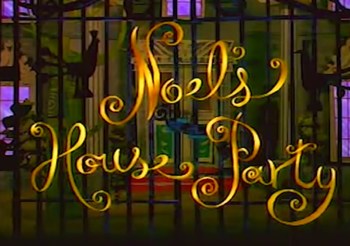 Seminal British Saturday night entertainment show of The '90s (1991-1999), hosted by Noel Edmonds (formerly of Multicoloured Swap Shop, contemporaneously of Noel's Christmas Presents, and later host of Deal or No Deal). A Spiritual Successor to the now largely forgotten Noel's Saturday Roadshow, its framework was based on the fiction of Noel owning a large stately home, the Great House, in the fictional but quintessential English village of Crinkly Bottom. It was a variety show, with a cast of recurring colourful villagers, audience participation, setups that involved people being drenched in the Gunge Tank (similar to Nickelodeon's slime, and equally emblematic of The '90s) and the recurring feature of the Gotcha Oscar (later just Gotcha). This was a Candid Camera Prank involving a celebrity being conned into doing what they think is some kind of serious activity (usually actors in a fake TV show) only for Noel to pop up with their 'Gotcha' award statue at the climax. One such celebrity was the radio DJ Dave Lee Travis (DLT) who was particularly outraged at the event and became Noel's Arch-Enemy, once participating in a Hostile Show Takeover as revenge.
Advertisement:

Another recurring feature was "NTV" (a pun on MTV) in which cameras would be concealed near the television of a random family of viewers (nominated by friends or neighbours) and, at the appropriate time in the show, it would cut to the view from these cameras and Noel would talk to them and involve them in activities. As a regular viewer, you could never be sure that it wouldn't cut to you.

In 1993 the show did a Gotcha segment which involved a fictional children's TV show based on the ridiculous character "Mr Blobby". This was intended to particularly embarrass the celebrities and arguably mock them for not realising that such a daft character would never get his own show...aaaaaand then Springtime for Hitler happened and Mr. Blobby achieved absurd levels of mainstream popularity in his own right, getting a number one pop single and being more famous than the House Party itself, while continuing to appear in it.

Both Mr Blobby and Noel's House Party in general are The '90s in the UK.