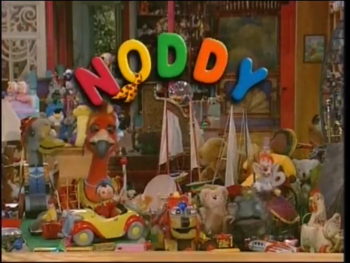 The toy cast of the show.
"Once upon a time, there was a magical shop in a town called Littleton Falls. When I was a boy, I knew it was magic because things moved on the shelves when no one was looking. Then I grew up and went to sea and sailed around the world, but I always knew I'd come back and run this shop someday. Oh, I forgot to tell you. My name is Noah Tomten, and this is the Noddy Shop!"
—Noah's opening narration in the first episode.
Advertisement:

The Noddy Shop note  The show's official title is "Noddy", and is known as Noddy in Toyland outside of North America, while promotional material calls it The Noddy Shop. We have decided to use the show's promotional name to avoid confusion with Noddy's Toyland Adventures, the name of the cartoon this show frames, or the 2009 Noddy adaptation with the international name of this show. is a Canadian Kid Com created by Rick Siggelkow that was the Spiritual Successor to Shining Time Station. The show centered on three kids, Kate; her brother, Truman; and their friend, DJ, who visit a toy shop (the titular Noddy Shop) every day after school while their parents were at work, where they would visit with Noah, the shop's owner and Kate and Truman's grandfather. But the shop isn't any ordinary toy store-the residents of the toy store can come to life and talk to them. One day, the kids discover a mysterious box and a key, which holds mischievous goblins that play tricks on people, as well as a map of an imaginary land and two dolls that turn out to be Noddy and Big Ears, which the kids decide to tell stories with that relate to real-life situations the kids face (which are represented by episodes of Noddy's Toyland Adventures). After the story had been told, the toys and Johnny would sing a song about the moral of the story to the kids. In some episodes, they would sing two songs, with the second one usually being a retelling of a popular story set to music.

The Noddy Shop contains examples of:

This theme song takes viewers on a tour of Notions, Oddities, Doodads and Delights of Yesterday.

This theme song takes viewers on a tour of Notions, Oddities, Doodads and Delights of Yesterday.