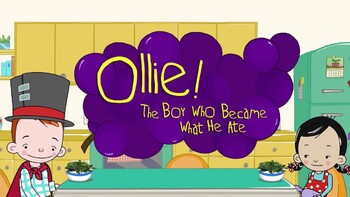 Ollie! (aka Ollie! The Boy Who Became What He Ate) is a 2017 CBC Kids animated show produced by Radical Sheep Productions (Fangbone!, The Bagel and Becky Show) and based on the children's book of the same name.

The show centers around a boy named Ollie, a fussy eater who is transported to a different world and who gains superpowers that depends on what food he ate recently. Together with his sister Poppy and her stuffed rabbit, Nummy, they go on crazy adventures, with Ollie learning about how it's important to eat a healthy food diet.