Literature / The Wonderful Adventures of Nils 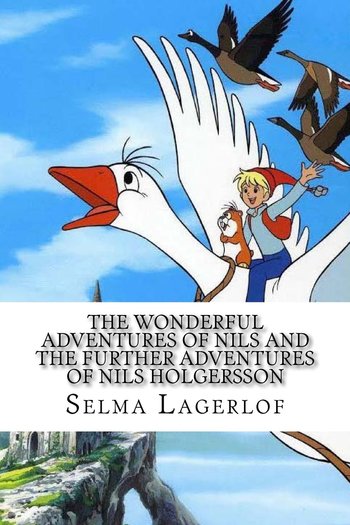 The Wonderful Adventures of Nils (original title: Nils Holgerssons underbara resa genom Sverige, literally "Nils Holgersson's wonderful journey across Sweden") is a Swedish children's book, originally published in two parts in 1906 and 1907, written by Nobel Prize-winning author Selma Lagerlöf. She wrote the book with the intention to teach children about the geography and natural history of Sweden in an entertaining way.

The story follows a mischievous 14-year-old boy named Nils Holgersson, who lives on a farm with his parents in Scania, the southernmost part of Sweden. As a punishment for his bad behavior, particularly his habit to abuse farm animals, a tomte (a small magical creature resembling a gnome or an elf) puts a curse on him that turns Nils into another tomte, becoming only a few inches high, but capable to talk to animals. To escape the animals that want to take revenge on him, Nils leaves the farm on the back of a white gander named Mårten Gåskarl, joining a flock of wild geese who are traveling to their breeding grounds in Lapland, the northernmost part of Sweden. What follows is a wonderful journey across Sweden where Nils learns valuable life lessons.

The book has been adapted to screen multiple times, including a 1955 Animated Adaptation from Soviet Russia and a 1962 Live-Action Adaptation from Sweden, but it's probably best remembered from the 1980 anime series by Studio Pierrot, which featured episode direction by a young Mamoru Oshii. Nils has become a cultural icon in Sweden, even appearing on the back of the 20-crown note (until he got replaced by another Swedish children's icon, Pippi Longstocking).

The book is in the Public Domain now; the English translation can be read online here

Tropes in the book and its various adaptations include: