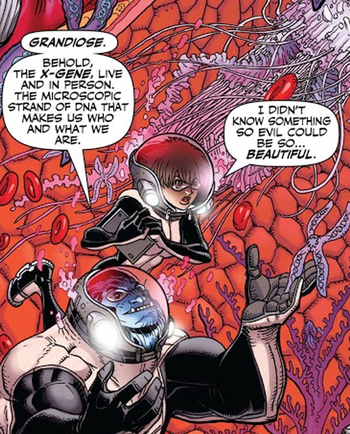 Obviously, there is no real life "X-Gene" that gives you superpowers.note  Also, chromosomes are located inside the nucleus of (most) human body cells, not floating around in the bloodstream, and while some cells have complex shapes there aren't any miniature jellyfish in your blood.
"This movie is too dumb on too many levels. I mean, why does everything on Earth freeze at night? Wouldn't that kill all the greenery, and the animals? And speaking of animals, why does that eagle adopt Jaden as one of its young, then commit eagle suicide to save him from the cold?! It hasn't figured out how to live in the cold over the last thousand years of being an eagle?! Seriously?!"
— Honest Trailers for After Earth
Advertisement:

There are cases where the MST3K Mantra certainly applies, especially if the entire world of the work of fiction is pretty crazy and, thus, all bets are off in terms of good science. Therefore, most of the examples below are culled from series who were at least trying to be taken seriously (so please keep that in mind before adding an example on this page).

A subtrope of Hollywood Science and supertrope to Pregnancy Does Not Work That Way. Contrast and compare Improbable Taxonomy Skills. Also a deeper trope than Informed Species, which is more of a general trope for characters that look absolutely nothing like their species.

The following examples do not fit any subtropes:

Drax designs a chemical that will kill humans but not animals or plants. Humans actually are animals and a huge chunk of animals roaming the world have similar respiratory systems, meaning that they'd be killed too.

Drax designs a chemical that will kill humans but not animals or plants. Humans actually are animals and a huge chunk of animals roaming the world have similar respiratory systems, meaning that they'd be killed too.