"I'm an old-fashioned gal. I was raised to believe that men dig up the corpses and women have the babies."
—Buffy Summers 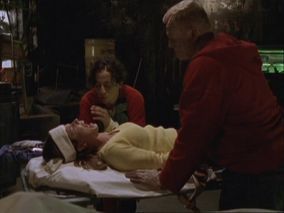 Buffy is waiting for a vampire to rise and is arguing with Angel about their relationship, or lack of one. Angel decides to leave and as Buffy follows, she falls face first into an open grave. The body appears to have been dragged out recently.

The next day, Buffy and Xander catch Giles practicing asking Ms. Calendar out on a date. Giles listens to Buffy's findings and fears someone is trying to raise a zombie army. Buffy finds Willow signing up for the science fair and she's talking to Chris, the reigning champ. As Buffy approaches, Chris' friend Eric takes pictures of girls passing by.

Willow finds the grave belonged to a girl named Meredith Todd had recently died in a car accident along with two other girls, Jane Atkins and Cathy Ryan. The Scoobies head to the cemetery to investigate. Buffy tells the others not to tell Angel as they are having problems.

That night, Cordelia leaves cheer-leading practice and heads to her car. Sensing someone is following her, she hides behind a dumpster. After feeling it's safe to come out, she bumps into Angel. They find dismembered body parts inside the dumpster and Angel decides to help her out.

The Scoobies return to the library to find a frightened Cordelia clinging to Angel. They decide to abandon the zombie theory and go to check other science student's lockers. They find medical books and an article about Meredith Tyler in Chris' locker and a jigsaw of female body parts in Eric's. Chris and Eric are building their dream girl.

In a secret lab, the two students are finishing up with their experiment but they still need a head. Eric has lined up three candidates: Buffy, Willow and Cordelia. Chris' brother, Daryl comes out from the shadows, looking disgusting and grotesque. He picks Cordelia's picture. Daryl was a popular athlete who died in an accident some years before. He was brought back by his brother and was promised a live-in companion.

The next day, Giles stumbles when asking Jenny Calendar on a date but she ends up asking him to come with her to the football game where she continues to tease him. Meanwhile, the Scoobies realise the science guys still need a head but as brain tissue decays so rapidly, they can't just dig up bodies from graves. The boys must kill someone and take the head straight away.

Buffy finds a lab in Chris' house and discovers the boys' next target. As she runs off to warn Cordelia, Daryl appears from the shadows. In the locker room, Cordelia is getting ready as Chris sneaks up behind her. Eric puts a bag over her head but is beaten up by Buffy. After Cordelia leaves, Chris tells Buffy about Daryl. They head back to his house and find Daryl is missing.

Buffy and Chris head back to the school. At the football game, Daryl watches Cordelia from the bleachers. As she goes to the water fountain, he drags her away. Daryl and Eric take her to an abandoned building where Eric plans to decapitate Cordelia. Cordy sees her old crush, Daryl in his decomposed state and screams. At the game, Buffy and Chris realise they're too late but Chris tells her where they can find Eric.

Meanwhile, Willow and Xander crash Giles' date with Jenny. Chris had told them what happened as Buffy rushes to the science lab. In the ensuing fight, a burner is knocked over and starts a fire. Xander arrives with the others and they help Cordelia escape. Giles and Willow drag an unconscious Eric out of the way. As Daryl is about to kill Buffy, Chris stops him. The others escape and Daryl decides to stay behind with the unfinished creation and die in the fire.

Jenny promises Giles a second date. While Buffy talks to Chris about his agonising decision to bring back his brother, Angel arrives. Xander talks to Willow, brushing off Cordelia who tries to thank him for saving her life. Buffy and Angel leave together through the graveyard. Angel admits he was jealous over Buffy's dance with Xander but Buffy reassures him that she's not in love with Xander.