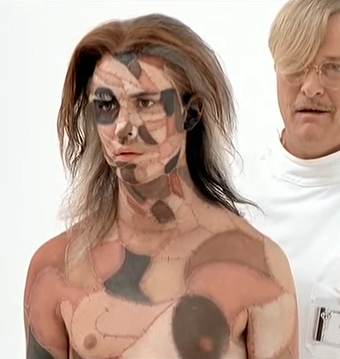 This is an Artificial Human, usually but not always a clone, who is created from the combined DNA of multiple individuals. Sometimes the intent was to clone a single individual exactly, but extra genetic samples were added to the mix by accident. Other times, this is done on purpose to give the clone specific traits from each genetic donor.

Non-clone Mix-and-Match Men are physically built from parts of other people, literally stitched together.

Can be Half Human Hybrids when at least one genetic donor is human and at least one isn't. Can be Mix-and-Match Critters when all genetic donors are non-humans, such as Human Aliens. Both Half-Human Hybrid and Mix-and-Match Critter examples of this trope occur when there is more than one species among the genetic donors. Obviously more likely to occur in settings where Designer Babies are common. LEGO Genetics are a prerequisite for making these out of vastly different species. Patchwork Kids is when an individual produced by normal reproduction might as well be one of these, and Extra Parent Conception is a variation of this trope where this occurs as part of a normal conception (or as normal as it gets for that particular species).