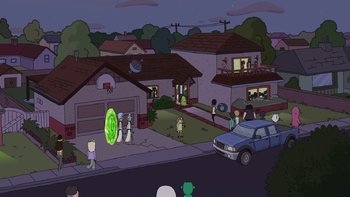 A party for the ages.
Written by: Ryan Ridley & Tom Kauffman
Directed by: Stephen Sandoval
Morty: Rick, tell Summer she can't have a party!
Rick: Uh, Summer, you can't have a party. Because I'm having a party, b-i-i-i-itch!

Beth and Jerry head for an iceberg of a date leaving Rick in charge. Morty doesn't get to go on any more adventures if the house isn't in the same condition when they get back.

"That's season one! Boom! Season one up in your face, motherfucker!"