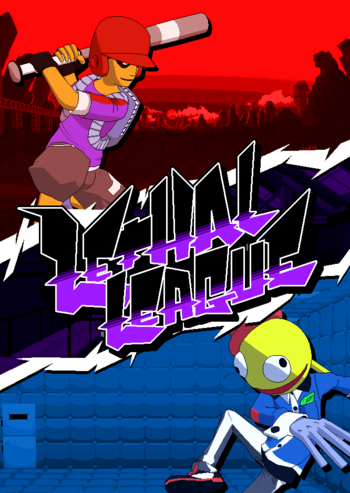 Lethal League is an indie Platform Fighter created by Dutch developer Team Reptile. It was originally a flash game, but it developed over time into what it is today. The game was released on Steam on August 27, 2014. The object of the game involves up to four players hitting the ball back and forth against one another in order to knock the opponents out of the arena. As the ball gets more hits, it will fly at faster speeds. The game launched with five characters: Raptor, Switch, Candyman, Sonata, and Latch. A new character, Dice was added on November 8, 2014. The game's site can be found here

, was announced for release on October 24, 2018, the teaser for which can be found here

. This game added three newcomers: Nitro, an ex-cop; Grid, a colorful mafioso; and Jet, a freewheeling skater, and officially makes Doombox Promoted to Playable bringing the total playable cast to ten. It iterates on the formula of the prior game by adding throws to compliment bunts hits and specials, a new health meter to avert one hit kills early in a burst, added a number of new game options including items, and has a tremendous improvement in visuals. The single player has also been developed into a full-fledged story mode that sheds light on the setting. Set in Shine City, a city ruled by the Tri-Government, the story sees several characters as they prepare to square off with each other in the upcoming underground sport, the titular Lethal League, while a shadowy conspiracy devoted to shutting it down for good evolves amongst them.