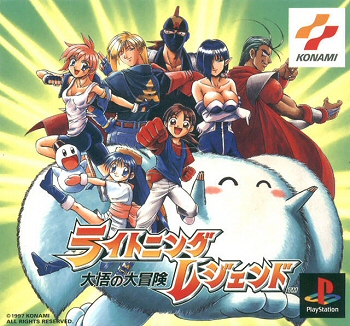 The setting takes place in the Japan-inspired Kingdom of Japone, where, around 450 years before the story starts, the Demon King Dragless rampaged through the lands until a young hero defeated and sealed him away. After centuries of slumber, Dragless is now showing signs of awakening, and it's now up to the 14-years old Daigo Raioh, descendant of the young hero, to defeat the monster once and for all. Meanwhile, other talented fighters will set out, some for reasons related to Dragless (like Terrific Forelock, the bodyguard and childhood friend of Princess Mirona, who's out to save her after she has been kidnapped by the Demon King), others not at all (like Misa Atago, who goes on a trip to ease the pain of her break-up with her boyfriend). In the end, all of them will learn about Dragless and realize how serious the situation is.

The title's fighting engine and gameplay are heavily inspired from Namco's smash hits of the time Tekken and Soul Edge, with its special features distinguishing itself over those titles being its colourful anime cast, and its RPG-like 100% Completion Item Collection system.

The characters are very original and feel very different from each other; you'll rarely get to play a creature such as Mokomoko for example, a blazingly fast and strong big furball-like giant rabbit.

As for the Item Collection system, during the game, in each round you defeat an opponent, you'll get a different item depending on the opponent and the way you defeated him (like with a Perfect, a throw, or a Super Move, for example). There are around 200 items to collect, and most of those items, when inspected closely in the game's options, reveal interesting tidbits about the game like concept artwork, character profiles, the story's chronology and authors' notes. The game is also rife with other unlockables, with several secret characters, stages, alternate outfits, and game modes.

Despite those attracting traits and a voice acting cast comprising several well-known seiyuu of the time, the game remained obscure because, Lightning Legend being Konami's first 3D Fighting Game, and Fighters other than Beat Em Ups not being their forte to start with, it’s hampered by several flaws in the fighting engine (a few hit detection problems, some cheap moves, and an auto-block system by just staying still that severly limits attacking options). The No Export for You factor didn't help either.