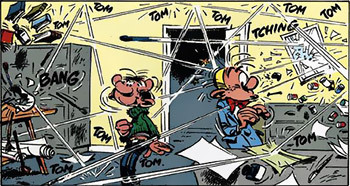 . A practical joke by the Great Attractor. He thought it was funny as hell."
— Agent K (about a one-inch diameter ball), Men in Black
Advertisement:

A ball (or some other projectile) bounces around incredibly quickly in a small location and causes vast amounts of damage. Hilarity Ensues.

Unlike the Pinball Projectile, the trajectory of the Hyper-Destructive Bouncing Ball is completely random and always leaves a swath of destruction in its wake. It tends to display unbelievable lack of inertia and won't stop ricocheting unless someone/thing catches it. It also takes the Law of Conservation of Momentum and throws it out the window, as it's not uncommon for one to inexplicably speed up when it hits a wall. No wonder it's generally Played for Laughs.

Confuse it with Happy Fun Ball at your peril. There's also a safer version for sing-alongs. Also see Bouncing Battler, when a character becomes one of these to fight foes. A Reflecting Laser can be this.