Allison: Are you hyperventilating?
Lisa: No, I just like to smell my lunch.
— The Simpsons, "Lisa's Rival" 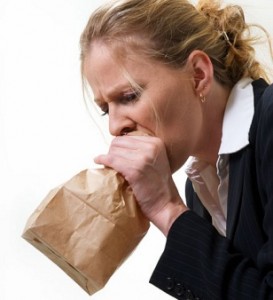 Often in TV, a character who is panicking will be shown inhaling and exhaling into a paper bag to calm down. In milder examples, it can be used to cure hiccups. Actually Truth in Television, as breathing into a paper bag is a good way to reduce the symptoms of hyperventilation,note Hyperventilating causes you to lose carbon dioxide too quickly, causing dizziness and fainting. The bag helps you retain it. according to The Other Wiki. However, one should never use a plastic bag for this, because suffocation will ensue.note Being porous and not as likely to cling around the mouth, a paper bag allows some oxygen to come in, which a plastic bag cannot do. While there are other ways to cure hyperventilation, the paper bag is the most iconic, providing an easy visual shorthand (and comical prop) for viewers.