The Dragons Come Back 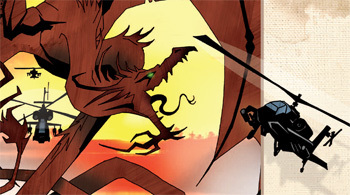 "The Elder Scrolls told of their return. Their defeat was merely a delay... 'til the time after Oblivion opened, when the sons of Skyrim would spill their own blood. But no one wanted to believe... believe they even existed. And when the truth finally dawns... It dawns in fire!"
— Esbern, narrating the teaser trailer

Here There Were Dragons, and then they left for somewhere else... and now they are coming back, for better or for worse. As the natural apex predator species, their return inevitably upsets the status quo of the setting, kicking off a variety of conflicts, such as:

Also included are mythical species that occupy similar position in their respective settings' supernatural food chain (e.g. some types of gryphons). If they are present, a conspicuous absence of actual dragons in the setting may be expected.

Contrast Last of His Kind (a single specimen is more of an oddity than an existential threat to other species). Subtrope of The Magic Comes Back and Not So Extinct. May or may not involve Fossil Revival.