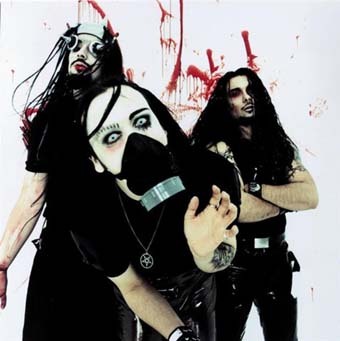 Norwegian metal group The Kovenant, formed in 1992 by Stian Arnesen (aka Nagash, Lex Icon) and Amund Svensson (aka Blackheart, Psy Coma, Pzy Clone), was known simply as Covenant once, and even released their first two albums, In Times Before the Light in 1995 and Nexus Polaris in 1997, under the name. Trouble arose when an Industrial group also called Covenant sued them and forced them to change their name. Ironically, The Kovenant changed its musical style from a Symphonic Black Metal sound to a more electronically-influenced style (which the band called "Progressive Space Metal") shortly afterward with Animatronic in 1999, and they moved to a very Industrial Metal-influenced sound with SETI in 2003. Along with the stylistic change, the content of their lyrics changed from being dark fantasy-based to being mainly about the negative traits of humanity and Religion Rant Songs. Songs about outer space began with Nexus Polaris and continued after the retool, but became less fantastical. Opinions differ on whether this was Growing the Beard or Jumping the Shark, depending on one's musical preferences.

Their fifth official album, Aria Galactica, has been in Development Hell since 2003, to the dismay of many fans. The band has not officially split up (even playing live shows from time to time during the extremely prolonged hiatus), but its leader Stian Arnesen has been preoccupied with his other band Troll, and they reportedly cannot find a record label to release Aria Galactica on. After SETI, The Kovenant re-released Nexus Polaris and In Times Before the Light under their new name, though the tracks were kept in their original form, unlike 2002's remake of In Times Before the Light which was given a more Industrial Metal sound than the original.

Tropes invoked by this band include: