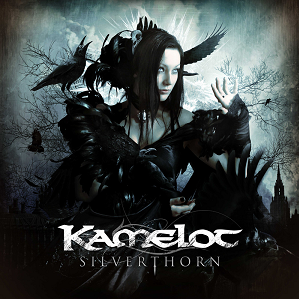 "I've been waiting a lifetime to show you
You're returning to heaven like dust to dust."
—Ashes to Ashes
Advertisement:

Silverthorn is the tenth album by Power Metal band Kamelot. It is their first album to feature their third singer Tommy Karevik, replacing Roy Khan who was in a way the Face of the Band up to that point. It is their third Concept Album and among those the first to not be part of the Epica Album Series.

Set in Victorian Britain, the story of Silverthorn focuses on two twins who are the offspring of an important English noble family. In their childhood, both are responsible for the death of their sister Jolee, who drowns in a river while playing with her brothers. They never tell their parents, who are devestated by the disappearing of their beloved daughter, the mother even dying of grief some time after her going missing. Their father, on the other hand, becomes more and more violent, especially towards one of the twins, Robert. Soon, Robert leaves the family and disappears without a trace.

The unnamed other twin (who is the narrator of the story) soon inherits the family’s estate after his father dies a mysterious death, and marries a woman named Aurora. But even in his life as a nobleman, he never is able to forget what he did to his sister. One day he goes to church and confesses his crime, believing that he now will be forgiven. But the tragedy is only just at hand, as the same day, his long lost brother Robert returns, having gone insane in his years of absence, killing Aurora at the estate.

As his brother returns, Robert makes people believe he actually is him and his brother is the one who murdered his wife, resulting in the unnamed protagonist being imprisoned for Robert’s murder and Robert impersonating him and in doing so taking over the family’s belongings. The narrator now sits in prison, going insane and hearing the singing voice of an angel that is reminiscent of his dead sister, comforting him and singing him to sleep. Robert, on the other hand, lives a life of fortune and luxury, but still never becomes happy, since all he ever accomplished was a result of a web of falsehoods.

In the text book of the deluxe edition, it is also mentioned that after some time in prison, the protagonist is released because of the priest to whom he confessed declaring that he was at his church at the time of the murder, therefore giving him an alibi. The priest waited with this declaration because he felt like the protagonist had to serve a sentence for his crime first. As a result of the protagonist being freed, Robert’s masquerade is finally uncovered and Robert is brought to trial.

I've prayed for salvation and tropes for ages:

"Life is a flower, fading away. We are not destined to stay."
—Silverthorn