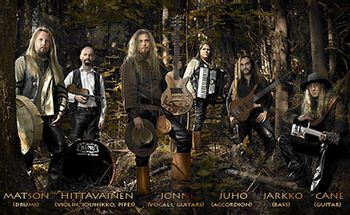 "According to Jonne, his time in the Lapland was supposed to be some sort of search for his true self, but all he could find was booze, forest, women and funny music and these are pretty much the things that you will find in Korpiklaani's music these days."
— Jarkko Aaltonen, interview

Korpiklaani are a Finnish Folk Metal band. They, along with Finntroll, are generally credited with the explosion of popularity that the genre has seen since the 00's.

Their origins are rather unique in the genre: most folk metal bands started as metal bands that added folk later; Korpiklaani started off as a folk band and added metal. Specifically, they started as Shamaani Duo, a Sami folk band employed by the Hullu Poro ("Crazy Reindeer") restaurant in Lapland. Jonne Järvelä then retooled the band into Shaman, playing the same folk music as before but with metal instruments and a synthesizer. After recording two albums (and playing as a guest musician for Finntroll), Jonne retooled the band again: they incorporated more metal influence into their songwriting—and Jonne switched from Sami yoiking to metal-style rough vocals in Finnish and English—while simultaneously replacing the synthesizers with traditional acoustic instruments. They also changed their name to Korpiklaani ("Forest Clan"), mainly to avoid confusion with the Brazilian band also named Shaman. It was as Korpiklaani that their popularity outside Finland really took off.