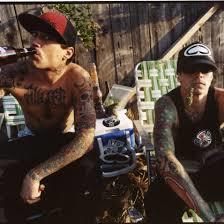 D-Loc and Johnny Richter, who make up the entirety of the band as of 2020, and also record under the name "Kingspade".
Kottonmouth Kings is a American Hip-Hop band from Orange County, California whose music is essentially a blend of G-funk, Psychedelic Rock and Skateboard Punk. The original group is basically broken up, but two original members, D-Loc and Johnny Richter currently tour under the Kottonmouth Kings name. The classic line-up of the band consisted of rappers Daddy X, D-Loc, Johnny Richter and Saint Dog, drummer Lou Dogg and DJ Bobby B, but there's been a Revolving Door line-up of various members coming in and out of the group since it's inception. Johnny Richter, for example, co-founded the band, but wasn't on their first album, because he didn't think they'd be very successful, and only rejoined KMK after they started to make money.
Advertisement:

Kottonmouth Kings are a group of Stoners from the suburbs who usually rap about a very small number of topics, most obviously about smoking weed, but also governmental and systematic hypocrisy and corruption and being true to oneself. Their best known song, "Suburban Life", showed a high level of self-awareness for white rappers, exhibiting, for example, criticism of white privilege, with the opening line stating "my pops bought the system" and stating that the American political system "ain't got no heart". KMK are also longtime activists for the legalization of marijuana. Rap critic Steve "Flash" Juon explained the band's success

by noting that unlike other white rappers of middle class origin, Kottonmouth Kings doesn't constantly rap about how "real" they are or come from the perception that they'd be attacked for allegedly being inauthentic due to their pale skin and being from the suburbs. Instead, Kottonmouth Kings simply were themselves, and were embraced for having natural authenticity, without having to announce how "real" they are, and their lyrics were based in who KMK are—white, suburban skaters who love alcohol, weed and pussy.

Daddy X and Lou Dogg were previously in a punk band called Humble Gods, which released two albums in 1995 and 1996, before officially launching their better known Hip-Hop offshoot in 1997 with a independently released EP through Suburban Noize Records, a indie label co-founded by bandmember Daddy X which has since become home to other rappers and punk bands (among which have included Big B, Unwritten Law, Mower, Moonshine Bandits, OPM, Hed PE and Jada Pinkett's Nu Metal band Wicked Wisdom; popular underground rapper Whitney Peyton is Sub Noize's most prolific recent signing).

KMK released their debut album, Royal Highness in 1998. Up until 2002, KMK albums had distribution through Capitol Records, but after their contract expired, released their albums solely through Sub Noize, for a while at least.

Around the mid-2000s, inner conflict within the band began to break it apart, with various members either quitting or getting fired for different reasons, Saint Dog being the first to leave in 1999, followed by the departure of Johnny Richter in 2013. It's generally believed by fans that Daddy X was the cause of these conflicts, with allegations of greed being leveled towards him. Dancer Pakelika, recognizable for wrapping his entire face up in bandages or bandannas, was fired so that Kottonmouth Kings could pay the salary of a new member, Oregon rapper The Dirtball, best known for his fast rap flow, who was a member of KMK from 2009 until 2016. The Taxman either quit or was fired due to conflict with other members, including D-Loc, but probably mostly Daddy X (Brad Xavier). Xavier was also having conflict with his label's co-founder, Kevin Zinger, and there were even rumors that Zinger slept with Xavier's wife.

In 2013, Kottonmouth Kings either left or were kicked off Suburban Noize due to conflict between Xavier and Zinger. Between insults traded back and forth between Zinger and Kottonmouth Kings (well, Daddy X mostly, to be honest), Sub Noize pretty much collapsed and for a while existed solely as merchandise store selling only T-shirts and the label's back catalog. There was also some major conflict with other groups, most notably Potluck, who stayed on Sub Noize, resulting in beef with KMK. Potluck dissed KMK on their album Stoner Problems, and Brad Xavier posted a Facebook message calling Potluck "slaves on the plantation sucking the slave masters Dicks", which received a mostly negative reaction from Kottonmouth Kings fans. It would become publicly apparent that much of the animosity within the band's ranks was Xavier's fault, but some former members who had quit or been fired have also accused Sub Noize CEO Kevin Zinger of being greedy, so Zinger, too, may have contributed to the inner turmoil within the band's ranks.

Kottonmouth Kings recorded for some other labels and their line-up whittled down to D-Loc, Richter and Saint Dog before the band re-signed with Sub Noize in 2019, a move that made sense considering that Brad Xavier, the member of the group who had the feud with Suburban Noize, was no longer in the group.

As you might imagine, with the instrument-playing members of the group leaving as KMK went on, the sound shifted more and more towards the Hip-Hop side of their sound and further away from their Punk and Rap Rock side.

Former members Pakelika and The Taxman were also members of the band Corporate Avenger with Brad Xavier's brother Spike. Former DJ, Bobby B, also had a DJ side project called Tsunami Brothers with rapper D-Loc under his DJ name Shakey Bonez, who also had a pair of solo mixtapes under that name.

Before D-Loc and Johnny Richter became the official Kottonmouth Kings line-up, they previously performed as a duo under the name Kingspade as a side project. The general consensus among KMK fans is that Kingspade is touring as Kottonmouth Kings to make more money, due to the KMK name being a bigger draw than "Kingspade".

The clothing brand SRH, which stands for "Stoners Reeking Havoc", was created by former member Brad Xavier and named after KMK's first EP.