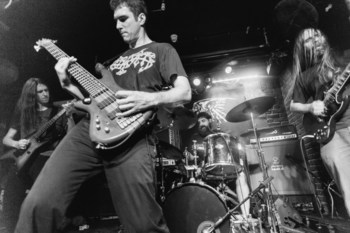 A Progressive Black Metal supergroup from Brooklyn, NY, consisting of Colin Marston (Gorguts, Behold the Arctopus, Dysrhythmia, etc.), Mick Barr (Orthrelm, Octis, etc.), Nicholas McMaster (Bloody Panda, Geryon, etc.), and Lev Weinstein (Bloody Panda, Geryon, etc.). Krallice has gained a substantial amount of critical acclaim for its blend of Black Metal, Progressive Metal, and Math Rock. Krallice's songs tend to be long and unusually technical by black metal standards, with around half of them exceeding ten minutes and featuring particularly clean production for the genre. The band has been likened to "Steve Reich playing very dense Progressive Rock". They have also earned comparisons to Weakling, although Krallice focuses more on Progressive Rock song structures and less on Drone of Dread than Weakling does. As of March 2021, the band has released ten full-length studio albums, one full-length live album, three EPs , and three singles.