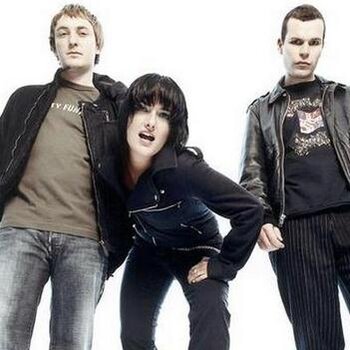 L to R - Markee Substance, Sian Evans, Darren Decoder
Kosheen were an electronic music group formed in Bristol, England in 1998, by the vocalist Sian Evans and producers Darren Decoder and Markee Substance. The band started off as a trip hop band, but Darren and Markee's drum and bass remixes of their own songs became so popular that they shifted direction to drum and bass. The band released several singles in 1999 and 2000 (including the non-album "Yes Men" and "Dangerous Waters"), before a 2001 reissue of "Hide U" catapulted them into the mainstream. The album Resist became a big success and featured several more hit singles. The band's follow up album "Kokopelli" was one of the best selling albums of 2003, but alienated some fans who felt they were selling out to a rock audience (the lead single "All In My Head" being based around a guitar riff, something none of their singles had previously done). The band acknowledged that they'd always had these rock influences and wanted to make the music they liked rather than pay attention to critics. The charts hugely changed between 2003 and the eventual follow up album "Damage" in 2007, meaning that the album did not sell as well as it could have done. To those who heard it, however, "Damage" was well received - it introduced a lot of electro elements that showed a growing depth to the band's songwriting, evident in the lead single "Overkill". The band have continued on with the following albums "Independence" (in 2012) and "Solitude" (in 2013).
Advertisement:

The band split up in 2013, due to Darren Decoder leaving the band and Sian wanting to work on solo projects. Sian has guested on some tracks by several dance artists. In September 2013, she began an acoustic project with her partner Ron Mc Elroy, which is ongoing.

Unlike many electronic bands, the band played their music live with a real drummer and guitarist and well as live vocals.