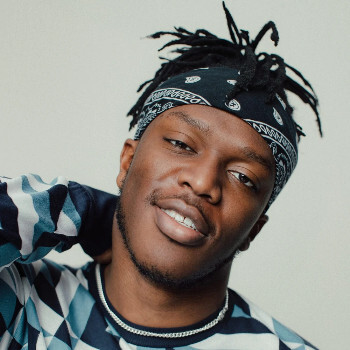 "Yo, what's up, it's ya boy, KSIOlajideBT."
Advertisement:

note short for KSIOlajideBT, a combination of "KSI" (initially the name of the Halo clan he was in when he made the name, but retroactively changed to "Knowledge, Strength, Integrity"), his first name Olajide, and "BT" for British Telecom, is an English YouTube personality, musician, boxer, comedian and actor, as well as a founding member of the Sidemen, a group of British YouTube entertainers.

KSI pretty much became the face of the FIFA fandom in the UK during the early 2010s, as football (not soccer) is Serious Business for many people there, with his first popularity resulting from a 'mini-series'

in which he discussed what was wrong with FIFA 11 and what could be improved in the succeeding edition. Nowadays, he stands as the owner of the biggest individual YouTube channel in the United Kingdom, with over 21 million subscribers on his primary channel and over 2 billion views on his videos.

While KSI predominantly uploaded videos to his main channel for a long while, using his second channel

"JJ Olatunji"note initially Call of Duty-only, and formerly named "KSIOlajidebtHD" before YouTube verification issues inspired the change to post content from a broader palette of games (often played with the Sidemen), his pursuit of a music career turned the main KSI channel into a professional hub of official music videos, singles and miscellaneous high-production-value content. His second channel, now updated far more frequently, currently hosts more fun and informal content; think of it as JJ the regular person, as opposed to KSI the big-name superstar. Recurring content includes Try Not to Laugh (where he reacts and almost always fails to avoid laughing at funny videos), Well...That Was Weird (where he reacts to simply bizarre videos), and a regular series of him reacting to fanmade content on his subreddit (available here

). In March 2021, he (alongside many other Sidemen) also started another channel

dedicated to short highlights of videos he's been in.

As far as music goes, KSI's career began early in his YouTube days with a series of comedic FIFA-based songs made with his rapper-producer friend Randolph before doing guest verses on several songs by British rapper Sway. He released EPs between 2016 and 2017, and transitioned to full-length albums around the end of the 2010s, one of them a fully collaborative work with Randolph (New Age). As his discography has progressed, he has gotten more serious with his craft, expanding his pop rap/trap sound to work with influences from R&B, synthpop, and house, racking up collaborations with established UK and US artists, and seeing a considerable increase in public support of him as a legitimate artist as opposed to making "YouTuber music".

Another prominent career path KSI has taken is into the world of YouTube boxing, starting with a match he won against fellow British YouTuber Joe Weller in one of the most-watched white-collar matches in boxing history. He subsequently called out and challenged Jake and Logan Paul, who agreed to respectively fight KSI and his younger brother Deji, also a prominent YouTuber, later that month. The highly-anticipated event occurred on 25 August 2018 in the Manchester Arena, with Logan and KSI coming to a controversial majority draw. A rematch, which was already planned alongside the August 2018 match, was held on 9 November 2019 at the Staples Center. This fight was distinctly held as a professional boxing match, with no headgear and lighter gloves, and ended in a split decision in favour of KSI. He then went on hiatus from boxing to focus on his music and content, and has announced a return fight for 27 August 2022 against YouTuber Alex Wassabi.

KSI is also known for other ventures. He released an autobiography in 2015 called I Am a Bellend (or I Am a Tool in the United States), co-starred in the 2016 direct-to-video comedy film Laid in America alongside fellow YouTube star Caspar Lee

, served as the focus of a 2019 documentary titled KSI: Can't Lose ahead of his rematch with Logan, and announced co-ownership of a hydration brand called Prime in 2022 alongside Logan, following the two squashing their beef and becoming friends.

. He also has an official shop

KSI and his channel incorporates the following tropes: