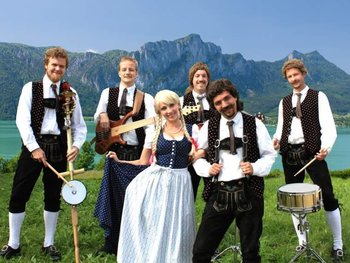 The world's best lederhosen wearing Austrian Nu-Metal Folk band
Kontrust is an Austrian crossover band formed in 2001 that incorporates Metal, Folk elements, and hard rock into one bizarre but highly entertaining group. Forming out of the band Suicide Mission, Kontrust's debut We!come Home gained them the Austrian Newcomer award, and a music video for "Phono Sapiens". The band hit it big time with their second album Czas na Tango (Two to Tango), with two singles: "The Smash Song", and "Bomba", which would establish their signature performing style.
Advertisement:

Namely, performing in lederhosen. And being weird.

The accompanying video for "Bomba" established their quirky style, their tongue-in-cheek humor and their genre-blending music into great success: gaining an Austrian music award, and a performance at the Przystanek Woodstock festival, and ended up being the most attended gig by an Austrian band to this point (according to That Other Wiki). They followed up on this in 2012 with Second Hand Wonderland, which had three singles. Their most recent release, Explositive, released in 2014.