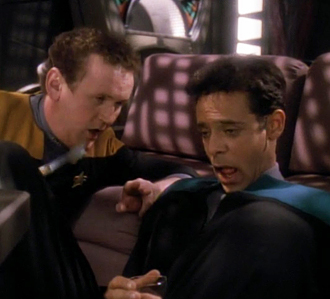 Jeruuuuusaaleeeemmmm!!
"There are some songs which are never sung sober. "Nellie Dean" is one. So is any song beginning '"As I was a walking ...'"
— Guards! Guards!
Advertisement:

A simple way to indicate that a person is drunk is to have them sing a drunken song. It may be bawdy or weepily sentimental, but it indicates inebriation even before you notice the slurred phrasing and lurching walk.

and anyone singing Nellie Dean was drunk. It was useful cultural shorthand in the days before you could show a grown man pissing or puking in public.

See Ode to Intoxication for songs about getting drunk. Contrast Ode to Sobriety... well, usually.

A bunch of cats and dogs sing, "When Irish Eyes are Smiling" while visibly inebriated.

A bunch of cats and dogs sing, "When Irish Eyes are Smiling" while visibly inebriated.