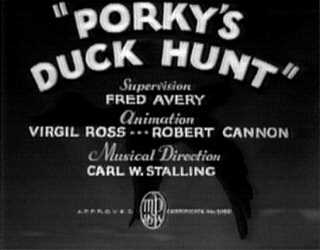 "Porky's Duck Hunt" is a 1937 Looney Tunes short directed by Fred Avery. It is a landmark short in the series, being one of the first truly zany cartoons and thus codifying what distinguished a Warner Bros. cartoon from anyone else's cartoons. This was also the first time Mel Blanc performed the voice of Porkynote He had previously been voiced by Joe Dougherty, who actually had a stutter, but it had gotten to a point where he couldn't control his stutter. As a result, recording sessions would last for hours. and the debut appearance of then-unnamed Daffy Duck.

The plot of the short is fairly simple—a young Porky Pig goes out on a duck hunt, only to find trouble from the other hunters, as well as one particularly pesky duck roaming the ponds...

This short was an immediate smash hit with audiences, and thus received a follow up a year later, Daffy Duck and Egghead.

This short can be found on the DVD sets "The Essential Daffy Duck" and "Porky Pig 101".

Has nothing to do with Porky Pig or Porky Minch appearing in Duck Hunt.

In his first few lines of dialogue, Daffy lets Porky (and the audience) know just what's in store with him for the years to come.

In his first few lines of dialogue, Daffy lets Porky (and the audience) know just what's in store with him for the years to come.