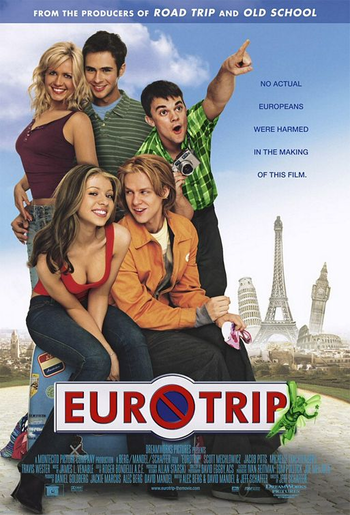 Scotty gets dumped by his girlfriend on graduation. He then goes on a trip to Berlin to meet his German pen pal Mi(e)ke (pronounced Mee-kah, a German feminine name aus Deutschland) and declare his everlasting love for her. He is accompanied by his sassy friend Cooper and "worst twins ever" Jenny and Jamie. There are many wacky cameos, including Matt Damon, Vinnie Jones, Lucy Lawless, Fred Armisen, Patrick Malahide and Joanna Lumley. Also starring Michelle Trachtenberg.

Euro Trip breaks the mold of many teen comedies, in that it never actually crosses the line from 'kind of goofy' to 'gross slapstick', and actually succeeds in inserting a bit of warmth and heart into the story.

It was filmed entirely in Prague.

Despite the similar title and theme, as well as sharing producers; it has no narrative connection to 2000's Road Trip.