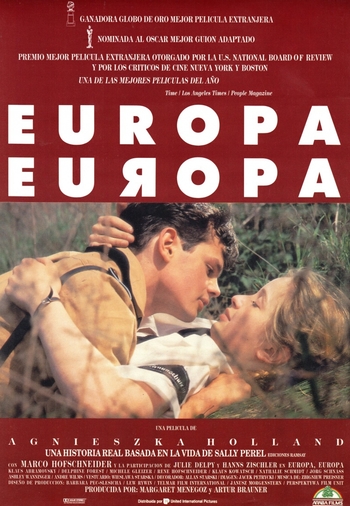 Europa Europa is a 1990 German film, its original title being Hitlerjunge Salomon, based on the true story of Solomon Perel.

After his sister is killed in Kristallnacht, the young Solomon Perel and his family flee Hitler's Germany and settle in Poland, only for the Nazis to invade a year later. Fleeing with his elder brother, Solly is quickly separated and ends up in a Soviet orphanage. He is separated from his friends again when the Nazis invade the Soviet Union during Operation Barbarossa. Picked up by a German patrol, he is able to pass himself off as a Volksdeutscher (ethnic German living outside Germany) and is taken in by the unit. After accidentally capturing a Soviet position and being declared a war hero, the company captain soon adopts him and sends Solly to an elite Hitler Youth school in Berlin, where his secret is in constant danger of being exposed.