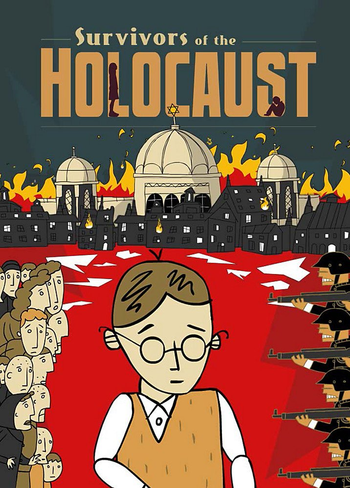 "At midnight tonight, the war is over. Tomorrow, you'll begin the process of looking for your families. In most cases, you won't find them. After six long years of murder, victims are being mourned throughout the world. We've survived."
— Oskar Schindler, Schindler's List
Advertisement:

Genocide is one of the most horrific crimes that can be perpetrated, and surviving a genocide almost inevitably leaves deep scars, whether physical or mental. Apart from how traumatizing it can be to face a threat to your life, be driven from your home, and lose numerous loved ones, making it to the other side of genocide only comes with a new set of challenges. Survivors have had their lives radically altered and things can never go back to being the same.

Works centered on genocide survivors often show how that trauma affected them and the difficulty of moving on with their lives. The reactions of survivors to what they experienced may vary, but you can expect them to struggle with PTSD, Survivor Guilt, and other mental health issues.

Along with a loss of life, genocides often lead to a loss of knowledge, culture, and recorded history. Some survivors will try to preserve whatever remains of their heritage, while others may feel angst because they aren't able to. If You Can't Go Home Again is in play, that can also serve as a major source of angst.

If the survivor eventually goes after the perpetrators, the result is Genocide Backfire. It may also be used as a setup for Nice Job Breaking It, Herod. If the survivors have descendants, those descendants may become a Racial Remnant. Compare War Refugees, which can overlap. Those guilty of Genocide from the Inside do not qualify as this trope.

This is distinct from Sole Survivor and Last of His Kind because a genocide survivor does not have to be only one from their background alive to still count. It is possible for numerous people to survive the same genocide. Some stories even involve multiple survivors dealing with their trauma together.

No Real Life Examples, Please!. There are so many people who have survived a genocide throughout history that trying to list them here wouldn't be practical. This only covers fictional genocides and fictionalized depictions of real genocides.