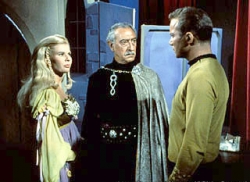 There's enough ham in this scene to feed a small country—or a space colony.
Advertisement:

The episode opens with a performance of Macbeth on Planet Q attended by Kirk and an old acquaintance of his, Doctor Thomas Leighton. Throughout the play, Leighton urges Kirk to pay attention to Anton Karidian, the actor playing Macbeth: Leighton is sure that he is actually Kodos The Executioner. (No, not THAT Kodos - though that is where they got the name.)

After the play, Kirk is pretty angry with Leighton since the latter claimed he had some sort of new food concentrate to end a famine, causing the former to divert the Enterprise three lightyears off course. Leighton claims he and Kirk are two of the nine people alive that can expose Kodos and is insistent that Karidian is him, since Leighton cannot forget the voice of the man who horrifically disfigured him. Kirk will have none of it, claiming Kodos is dead and leaves, wondering what the hell he's supposed to write in his report.

The story of Kodos is revealed gradually over the course of the episode: 20 years ago, Kodos was the governor of the Tarsus IV colony, in which Kirk and Leighton resided. When a fungal infection destroyed most of the colony's food supply, the colony's 8,000 residents faced starvation. Kodos responded to the crisis by having half the colonists executed, using his personal eugenics theories to select who would live and die. Eventually supply ships arrived much earlier than predicted, making all those deaths utterly pointless. All that was found of Kodos was a body burned beyond recognition, and he was declared dead.

Kirk decides to go over a photo record of Kodos, and notes his similarity to Karidian. He also finds that there are no records of Anton Karidian older than 20 years, the same time as Kodos' "death". Intrigued, he decides to stay on the planet a while longer and attend a party Leighton is giving hoping to trap Karidian.

At the party, he finds that Karidian isn't attending but his daughter Lenore is. Kirk turns on his usual charm and they go for a walk, during which they stumble upon Leighton's dead body. Kirk is now determined to get to the bottom of this: he calls in a favor with the captain of the ship Karidian's troupe was meant to take off world to make it leave with no prior notice, stranding them there. Lenore then asks Kirk to give them a lift, just as he planned. Kirk accepts, in return for a "special performance".

Kirk then uses the ship's computer to look up the identities of everyone who met Kodos in person other than himself. One eyewitness is Lt. Kevin Riley, whose actor appeared as a singer in "The Naked Time". Despite having been recently promoted, he orders that Riley be reassigned to his former position, presumably to protect him. He also gets closer to Lenore, though whether it's to get more information on her father or it's just Kirk being Kirk is up for the viewer to decide.

Meanwhile, Spock is getting suspicious about Kirk's recent behavior and decides to investigate. He manages to figure out the Karidian/Kodos situation thanks to the ship's computer and reports his findings to McCoy. Spock also discovers that of the 9 people who could identify Kodos, only Kirk and Riley are still alive. Worse, all the others died in mysterious circumstances... and always in relative proximity to Karidian's theater troupe.

Speaking of Riley, he's not taking his reassignment well. While distracted by Uhura playing him a love song on comms at his request, a gloved hand sprays an industrial lubricant in his drink, poisoning him. Luckily Uhura hears his cries, and he's transported to Sickbay in time to save him. Spock urges McCoy to save Riley, since if he dies, then Kirk is certainly next.

Riley survives, and Spock and McCoy finally decide to confront Kirk. Kirk doesn't like "meddling in his personal affairs" but as Spock points out, this affects the functioning of the ship and thus is their concern. However, he does agree that all the evidence points to Karidian being Kodos. McCoy then starts questioning Kirk's motives:

Spock: Even in this corner of the galaxy, Captain, two plus two equals four. Almost certainly an attempt will be made to kill you. Why do you invite death?
Kirk: I'm not. I'm interested in justice.
McCoy: Are you? Are you sure it's not vengeance?
Kirk: [dejected] No, I'm not sure. I wish I was. I've done things I've never done before. I've placed my command in jeopardy. From here on I've got to determine whether or not Karidian is Kodos.
Spock: He is.
Kirk: You sound certain. I wish I could be. Before I accuse a man of that, I've got to be. I saw him once, twenty years ago. Men change. Memory changes. Look at him now, he's an actor. He can change his appearance. No. Logic is not enough. I've got to feel my way, make absolutely sure.
McCoy: What if you decide he is Kodos? What then? Do you play God, carry his head through the corridors in triumph? That won't bring back the dead, Jim.
Kirk: No, but they may rest easier.

This dramatic exchange is interrupted by the loud hum of an overloading phaser, which would blow up the entire deck. After finding it and disposing of it, Kirk finally has enough and confronts Karidian. After getting evasive upon being asked if he is Kodos, Kirk makes him read an execution order which Kodos read several times to use as a voice match. Karidian starts reading but eventually keeps going, barely glancing at the paper, as if reciting the words from memory. Nevertheless he is still evasive, though he mentions that "Kodos" might be considered a great hero if the supply ships hadn't come. He asks Kirk why doesn't he kill him now if he's so sure he's Kodos, to which he replies it would change nothing. Karidian mentions how tired he is of life and that he no longer treasures it, not even his own. He ends the conversation with this:

Karidian: Did you get everything you wanted, Captain Kirk?
Kirk: If I had gotten everything I wanted, you might not walk out of this room alive.

Lenore then enters and asks Was It All a Lie?. Kirk says it was initially, but not anymore. Lenore calls him merciless and storms off.

Meanwhile, Riley overhears McCoy talking about how Karidian is suspected of being Kodos. Since Kodos murdered Riley's family, he hatches a plan for revenge.

Spock tells Kirk that Karidian's voice is a match, but Kirk isn't convinced, since it's not an exact match and there's a man's life at stake. They then receive news that Riley has gotten out of sickbay and stolen a phaser. They head towards the ship's theater where the "special performance" of Hamlet by Karidian's troupe is taking place.

Kirk finds Riley getting ready to shoot Karidian from backstage, but talks him into dropping the phaser. Karidian and Lenore arrive backstage and the former finally comes clean and explains to Lenore that this is a result of the "part he played long ago" that he never told her about that has resurfaced. At this Lenore decides to drop the bombshell: she knew all along that Karidian was Kodos and she was the one who killed all the witnesses, including Leighton and the attempt on Riley, all to protect her father. She grabs a phaser and points it towards Kirk. Karidian, completely horrified at what his daughter has become, takes the shot meant for Kirk. Lenore breaks down in tears and is led away.

Later on in the bridge, McCoy mentions how Lenore will be taken care of. Apparently she has gone completely insane and thinks her father is still alive, giving performances to cheering crowds. When McCoy asks if Kirk really cared for her, he refuses to answer and the episode ends.

The Conscience of the Tropes: