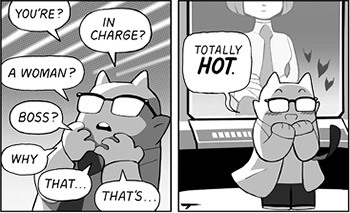 What is it about power that can make someone weak in the knees? Perhaps it's the control issues, to be dominated by someone that's just more than you, or is it something that just brings out our primal lust?

Naturally, the Super-Trope of many dominant/subordinate relationship-based tropes. Also related is Evil Is Sexy, seeing as how evil is often simply a means of attaining power. This trope is often used to explain the Kavorka Man and All Girls Want Bad Boys. Compare and contrast In Love with Your Carnage; also compare Power Dynamics Kink, when someone is "turned on" by being subjugated and punished.

And his attitude towards her for the rest of the episode is gushing and fawning, eventually trying to bribe her into being his wife. (She declines.)

Alternative Title(s): The Power Of Sexy