Fanfic / The Power of Seven 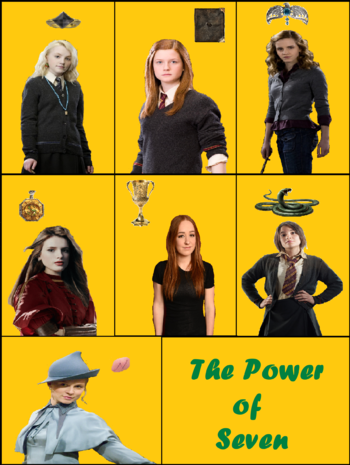 The Seven and their 'counterpart' horcruxes (see Rule of Symbolism); artwork by Marcus S Lazarus
The Power of Seven

is an AU Harry Potter tale, starting in the latter half of Harry Potter and the Half-Blood Prince, where Harry learns that he is a horcrux while Dumbledore is still alive. Seeking a way to save her friend, Hermione discovers a ritual that could theoretically negate the horcrux in Harry’s head, but at the cost that Harry must use ritual sex magic to bond with seven witches. Already in a relationship with Ginny, Harry now finds himself seeking six other women to form such a bond with, all while various characters realise their own sexual kinks.
Advertisement:

The story pairs Harry with seven different girls; specifically, Ginny Weasley, Hermione Granger, Luna Lovegood, Demelza Robbins, Susan Bones, Katie Bell, and Fleur Delacour. Ginny, Hermione and Luna were obvious candidates for the ritual from the beginning, but while Harry began 'testing' his relationship with Susan and Demelza in chapter 6 and 7 respectively, Susan only learns the full details in chapter 19 while Demelza initially assumes it's just a sexual fetish from chapter 8 until chapter 29, which also sees Katie being officially 'brought into the loop' after being invited to a sexual relationship in chapter 23. Harry bonds with Ginny in chapter 10, Hermione in chapter 21, and Luna in chapter 38, and has an orgy with the existing six girls in chapters 31 and 39/40. As for Fleur, after realising that Harry is having sex with multiple girls in chapter 34, she spends the next few chapters learning the full details of the situation and being inadvertently 'teased' until she fully commits herself to aiding Harry in chapter 46. Harry subsequently bonds with Demelza in Chapter 58, has a full orgy with all seven girls for his birthday in Chapter 63, and bonds with Susan, Katie and Fleur on the same night in Chapters 75 to 77 through use of a time-turner when they have to complete the ritual prior to the final confrontation with Voldemort.

The story is complete as of 4 April 2021. The author has since started The Lightning Strike, a crossover with the Marvel Cinematic Universe.

The Power of Seven contains examples of: