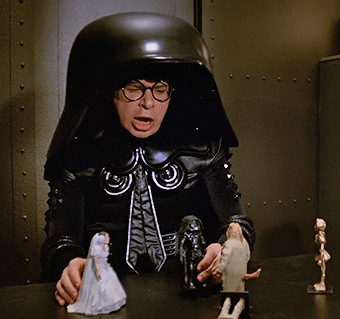 "They're not dolls. They're action figures!"
Target: [thought bubble] Her eyes... so lifeless. Her cybernetic augmentations have robbed her of her soul. Emotionless. Hollow. She's the perfect killer.
Space Dread: [thought bubble] I'm glad that it's raining and nobody can tell that I'm crying over a broken laptop right now.
— Val and Isaac, "Machine"

This villain comes across as really imposing, and they probably have real power to back it up. However, they are really nerdy underneath.

They are trying to hide it, behind a tough façade. So it's a big surprise when the nerd is revealed. This surprise can come to other characters, the audience or both.

The classical façade to hide behind is a literal helmet. But it can be something else.

Nerds are not always wimps. Not a total one at least. However, the villain might exploit such stereotypes and pull a Wounded Gazelle Gambit or similar after his nerdy side has been revealed, even if he actually is a badass.

For a genuinely intelligent villain see Evil Genius. Can be the same kind of dissonance as Villains Out Shopping. Compare and contrast with Evil Nerd — this trope is when a villain's nerdy nature is juxtaposed with their menacing demeanor, while an Evil Nerd's nerdiness is the foundation for their evil.