Music / Up Up Down Down 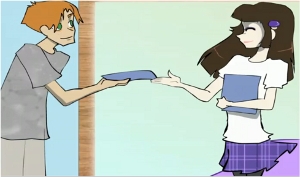 "Up, Up, Down, Down" is a Flash animated music video by self-proclaimed "Nerd Rock" band, Kirby Krackle. It starts out as a sweet love song about a geeky video game store clerk who has a crush on a girl who frequents his shop, before going into something completely different. The video can be viewed here

The video provides examples of: