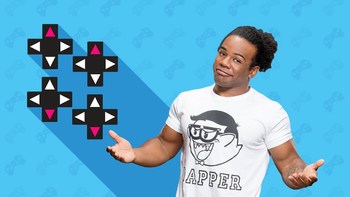 Up Up Down Down is a YouTube show hosted by WWE Superstar Xavier Woods under his indie name Austin Creed. Austin and other WWE personalities sit down to play games as well as discuss what goes on behind the cameras. Each person that comes onto the show has their own unique gamertag, or nickname they're known by when playing games.

The Up Up Down Down channel produces additional videos and related spinoff shows, such as Let's Plays, Battle of the Brands, and SAVEPOINT.

The channel is here

Tropes in the Up Up Down Down show: