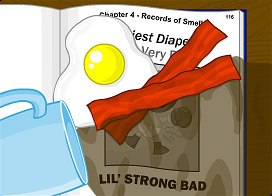 "'Dirtiest Diape—?! WHOA! COUGH COUGH COFFEE EGGS BACON! Oh, too bad. I 'accidentally' made breakfast all over whatever that record was for."
— Strong Bad, Strong Bad Email #134 "record book"
Advertisement:

When a person has something that they never want to see again, they can render the item unusable by spilling something on it and making a huge stain. Spaghetti sauce is very good for this, but one can get creative and use things like black coffee, soda, feces, and even Hollywood Acid. Or simply just spilling their inkwell on it.

Can be used to create a Conveniently Interrupted Document or an intentional Wardrobe Wound. The use of this trope can signal a Revealing Cover-Up. Not to be confused with Eat the Evidence, where instead of covering the offending object in food, the offending object is consumed as food. Compare with Mustache Vandalism, when one creatively uses ink to deface a portrait.

Definitely not to be seen as Discreet Drink Disposal.

Dangeresque can try to make the case file unreadable by spilling coffee on it, which results in him going to jail.

Dangeresque can try to make the case file unreadable by spilling coffee on it, which results in him going to jail.